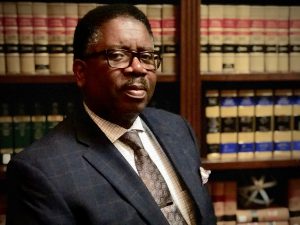 W. Terry Sherrill currently practices law with his nephew in a two-lawyer firm in Charlotte, with an emphasis in criminal law. Mr. Sherrill completed his undergraduate studies at, and earned his law degree from, the University of North Carolina at Chapel Hill. He was admitted to the NC Bar in 1980 and was appointed to the district court bench in 1983. Then in 1986, Mr. Sherrill became the first African-American lawyer to be elected to the bench, in a contested statewide election, since Reconstruction. He has been a LAP volunteer since the early 1990’s and speaks at CLE statewide and nationally. He is a member of the John S. Leary Bar Association and the North Carolina Association of Black Lawyers. Mr. Sherrill is a past chair of the PALS committee, has served on the State Bar’s LAP Advisory Board and was a member of the board of directors of the LAP Foundation, Inc. for over a decade. He belongs to the Greater Salem Church of Charlotte, where he is a deacon and board chair.