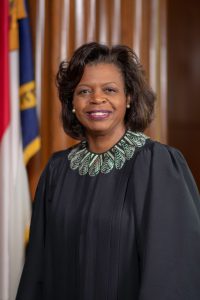 She began her judicial career as a district court judge in Cumberland County where she served for a decade before being elected to the Court of Appeals in 2008.

While she believes passionately in having an independent judicial branch that administers justice fairly, Chief Justice Beasley also knows the courts can play an important role in helping people better their lives. That’s why she is working to engage schools, law enforcement, faith leaders, and other stakeholders in discussions about important community issues.  And by implementing online services and increasing the number of specialty courts, she’s also working to make the judicial system more accessible to all North Carolinians.

Chief Justice Beasley’s commitment to fair and accessible courts extends beyond the halls of justice. She has mentored countless students and judges, lectures at area law schools, and travels nationwide and abroad to promote the rule of law, the administration of justice, the importance of an independent judiciary, and fair judicial selection.

She and her husband, Curtis Owens, are the proud parents of twin sons in college, Thomas and Matthew.