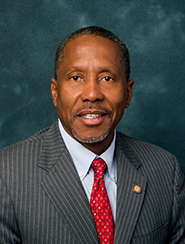 Darryl Rouson is a St. Petersburg, Florida, lawyer, political activist and Democratic member of the Florida Senate who has represented the 19th district, which includes parts of Pinellas and Hillsborough Counties from downtown St. Petersburg to downtown Tampa, since 2016. He previously served four terms in the Florida House of Representatives from 2008 to 2016. He is a former president of the St. Petersburg NAACP and former chair of the National Bar Association’s Substance Abuse and Addictions Task Force. He was Pinellas County’s first African-American assistant state attorney.